Since, I’m a couple of months behind on blogging, I’ll just keep updating until I’m caught up! 🙂 mmm, kay?

Back in March of this year, we found a place at the bottom of a slope that holds moisture well. We decided this would be a good place for our first potato patch. It was away from the rest of the garden so keeping weeds out would be a problem but we thought we had it taken care of with cardboard boxes and 8 inches of mulch. Bermuda grass laughs at gardeners’ efforts. Weeds invaded 😦

As soon as I dug up the last of the potatoes in July, I decided on a new potato patch for the 2014 season. I’m not sure if it gets enough sun but it is in the garden area (surrounded by a border of plastic, covered with mulch) so at least I know weeds will not be a problem.

In September, I noticed I missed some potatoes and we had about 7 new plants popping up in the old potato patch. In October, I covered the patch right before the first frost to keep them growing…

but they still wilted.  I went ahead and dug up the potatoes and planted them in the new potato patch. 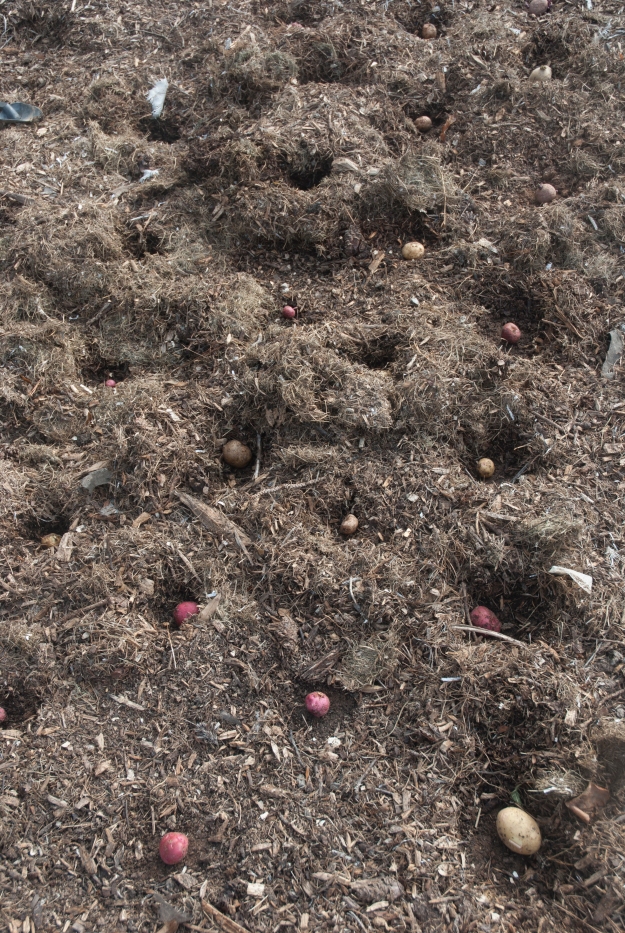 It will be a good experiment to see how they do, overwintering here in NC. (For those who do not know, Paul Gautschi harvests & plants the same day and does not rotate his crops.)

Also before the first frost in October, I cleaned out part of the garden area with the snaps, tomatoes, and peppers. Little by little, as I get more energy, I have been cleaning out the rest of the garden.

(still not enough energy, etc. to save all of the unripened tomatoes)

(saved just the best looking ones & gave them away)

(one row cleared out)

The next step is to cover it with chicken manure so that can overwinter & the garden will be ready to plant in the spring! Paul points out:

Gardeners fertilize in the spring…but when does God do it? In the FALL! (think leaves falling) That way, the manure/mulch/compost has time to work its way into the soil, the worms have time to do their job, and no work is needed to be done in the spring!

How do you prepare your garden for the winter…all at once or little by little?