I have been trying all year (well, since January) to grow celery. No such luck. I know it does not grow well in North Carolina because it likes cool temperatures and we are not known for that here in the south. However, we go through celery with all of the juicing we do so I keep trying!

I tried sprouting celery seeds in greenhouses during the winter, planting seeds in the shade, sprouting them inside on a wet napkin and then planting the sprouts…nothing worked. So, I took a break from seed planting (I’ll try again in the winter in a more controlled environment) and tried to plant from celery stumps from the store.

We put the celery stumps in water on our kitchen table until they started sprouting.

Then, I planted them in the most shaded area of our garden (does not get sun until 1-2pm every day) under a shade cloth (repurposed window screens that were ripped).

(At first the screen was just propped up on rocks.)

I later took the screen out of the window frame and covered the celery properly. I also planted more stumps. A couple have not done well. I think I may have planted them too high up on the stump. But most of them are growing well. I am still very much at the beginning of the celery experiment. We’ll see how it progresses…

I planted kale and cabbage in the section of the potato patch that does not get much sun during the day, where potatoes had already been pulled. I did not cover them at first because it is so hot. The cabbage butterflies loved that 😛 So, I covered them in garden cloth until I got around to covering them properly with shade cloth (previously mentioned in the celery section). There are still plants with many holes in them but they are bouncing back (kale especially). 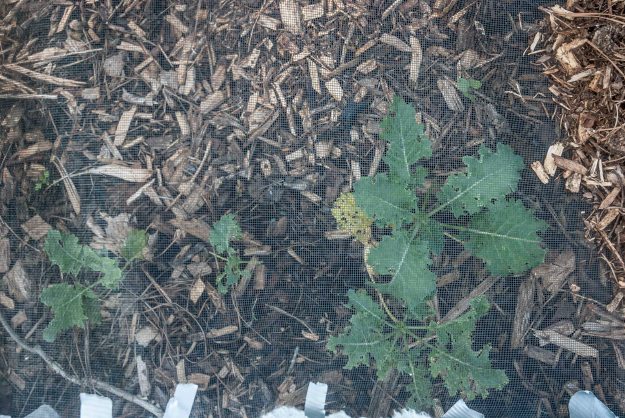 (Celery at the top of the picture, cabbage in the middle, kale towards the bottom…not quite enough screen so I improvised to keep out the cabbage worms.)

If you recall, after clearing my corn patch, I decided to plant a two foot border of peas all the way around and root crops in the middle section. I planted half of the area with carrots and peas, but ran out of carrot mats and peas (a neighbor had given me his leftover pea seeds from the spring).

I bought more pea seeds and planted the rest of the bed with those, more carrots, beets, and bunching onions this week.

The dark U-shaped section is where I planted the rest of the peas, covered them with chicken compost and mulch (just starting to cover with mulch in this picture). The sticks are to deter the cat. She is a great garden cat as she keeps the moles/voles, bunnies, and birds away but she LOVES to dig up freshly planted root crops! Drives me insane! The sticks deter her enough though so that’s good 🙂

(Look closely, past the out-of-focus pea shoot to the itty-bitty carrot sprouts.)

I planted spinach and lettuce right next to the celery, cabbage, and kale (uncovered) in the potato patch. They are just starting to sprout. I also planted some spinach and lettuce in the box with volunteer sweet potatoes. It is covered with yet another broken window screen.

Most of my broccoli, planted under the apple tree, has been eaten by something 😦 I want to plant a lot more broccoli, cabbage, and kale but I think I’m going to have to buy some real shade cloth before I can do that. It is supposedly too late to plant but I am going to keep trying. It doesn’t hurt and as long as I keep a good garden journal going, telling when crops were planted and how they did, the garden will do better every year. That is the hope, of course! 🙂

What else do you plant in your fall garden? Am I missing something tasty? I have yet to venture out to grow my own herbs. They scare me.

I am linking up with Green Thumbs Thursday to see what other gardeners are up to!

1 thought on “How Is the Fall Garden Progressing? Eastern NC, Zone 7b”