The most noticeable difference between the beginning of August and the beginning of September is the lack of sunflowers. However, there are many more differences, if you look a bit closer. For one, we have electric fencing all around the garden, to deter the raccoons and groundhogs.

Walking through the garden, to the left, I have more brassica seedlings sizing up under shade cloth. 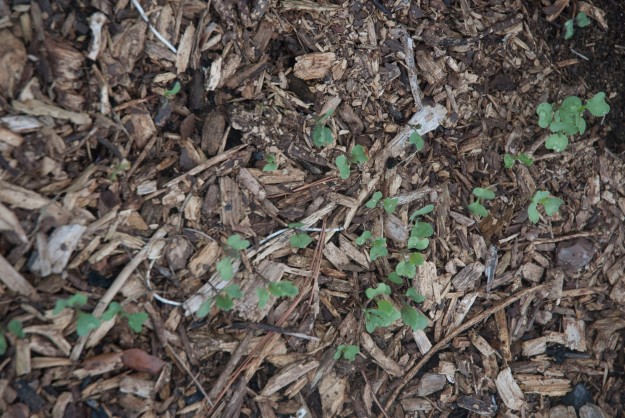 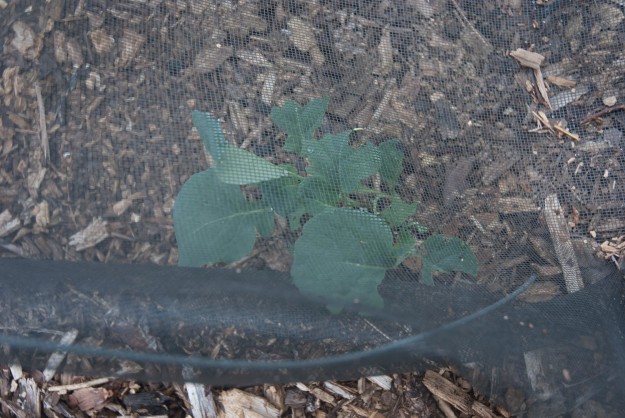 (broccoli planted mid-July. may transplant these next week)

To the right, there is the former potato patch with one struggling winter squash.

Further to the right is the former sunflower patch with some leftover watermelon and cantaloupe plants. I need to put some caging over them to protect them from the crows.

Moving on is the former cabbage patch (with some volunteer tomatoes). I have tried planting carrots and peas here. The carrots are going to be replanted but the peas are trying to poke through. I assume it was just too hot for the carrots to sprout but I can’t figure out why the peas did not germinate well. I planted peas elsewhere in the garden that are doing great. This spot has more shade but not an extreme amount and both places have plenty of manure and compost. Conundrum…

Moving along, in the former melon patch, I am planting all of my leafy greens (spinach, lettuce, kale) for the fall. To the left and right of this patch, are my ugly (but still producing) tomato plants.

(still getting about a gallon of tomatoes/day)

I have some boxes that are empty right now. I will plant brassicas in half of them and carrots and beets in the other half shortly. To the left of the boxes are the strawberry patches and the raspberry patch. Strawberries are trickling in (they do better in the spring).

The raspberries give us a wonderful treat in the fall! I need to prune all of the raspberry canes that produced this year. I also need to replant ALL of the MANY raspberry shoots that have popped up everywhere! I haven’t decided where I want them though… 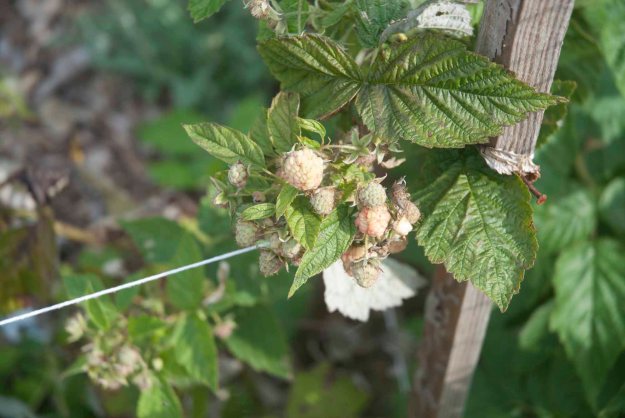 To the far right of the boxes is the old potato patch and my daughter’s old garden (she ripped it up at the end of August – she was tired of harvesting so everything was rotting). OH! And the tunnels! Don’t want to forget the tunnels! The former broccoli and kale beds (under tunnels) house beautiful purple beans currently (as well as some melon plants).

Under the tree, there is quite the hodge-podge.

(another round of beans to the left, flowering cilantro to the right, a cucumber plant in front of the tree…and in the bottom of the photo – our fall peas!)

This was a new section. Earlier this summer, we ripped up tarp that was laid here years ago and put down chicken manure and wood shavings from when we cleaned out the coop.  (all of the dark mulch is where the tarp was ripped up)

I was not going to plant in it until spring but I was running out of room when it was time to plant more peas/beans so I gave it a shot. Everything is doing well here (the beans to the left were just planted a couple of weeks ago). The peas are ready to be trellised.

At the end of the garden, we have the sweet potato patch (partially eaten) and the (other) former sunflower patch. 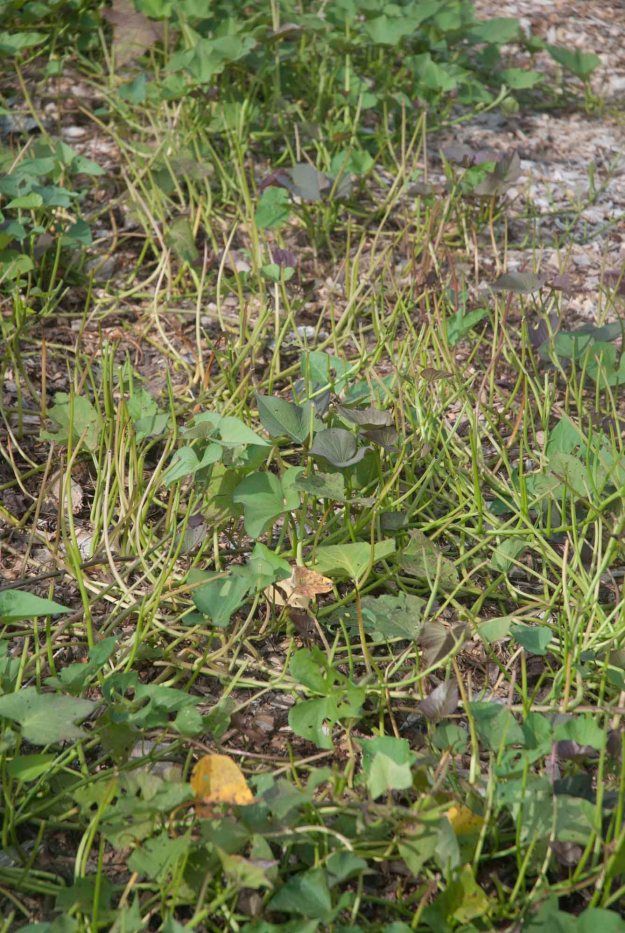 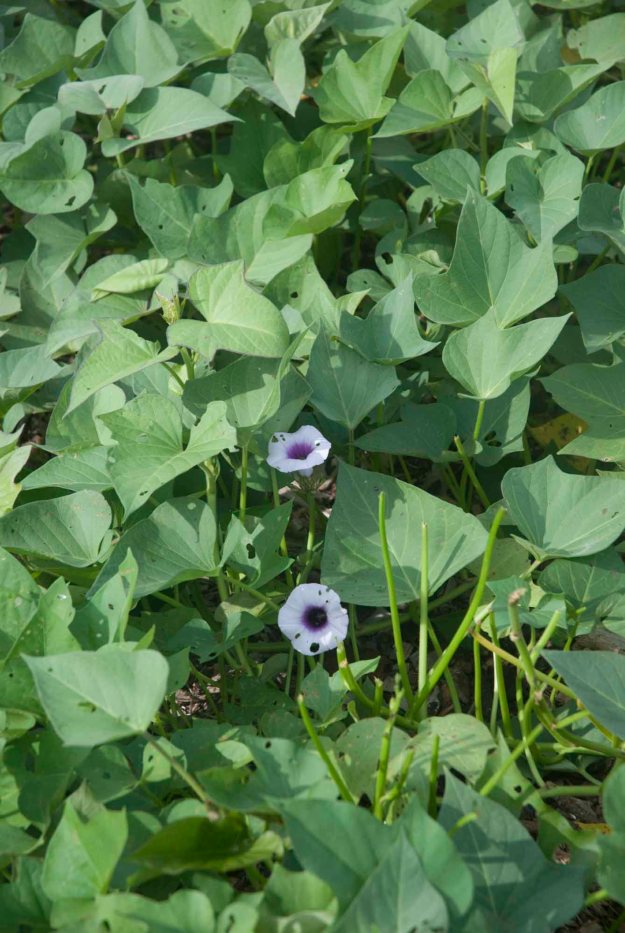 (sweet potato blooms are a good sign though, right? 🙂 )

I will harvest the sweet potatoes sometime in October, around the first frost. I am not expecting as many sweet potatoes as last year but I will have about 13? or so varieties as compared to last year’s one. We are going to taste test these, decide which ones we want, and will save many for slips for next year.

The trees seem to be doing well. They are growing every year. The ones in the mulch grow better than the ones in grass. However, still no fruit. I don’t know what I can do to remedy this. I am going to just keep adding compost around the trunks, like I do with the rest of the garden, continue to cover them with mulch as we are able, and be patient. Maybe one day we will not have to buy fruit at the store! (the dream)

We actually harvested MORE eggs in August than June or July! I am pretty sure it is because some of our spring-hatched chicks have started laying. I do not see any red combs but there are some eggs that are significantly smaller than the rest (our other hens are 2yo) and our older hens are moulting so that would be the only logical reason we are getting slightly more.

Since the children do such a great job taking care of the baby chicks, I told them I would pay them once their chicks started laying (after taking out the cost of feed). So now, we are keeping up with how many eggs we are collecting each day AND how many small eggs we are collecting. I’m excited for them – we’ve had such a hard time keeping chicks alive (btwn snakes, foxes, other chickens, and bad mamas leaving them out in the rain… 😦 ) 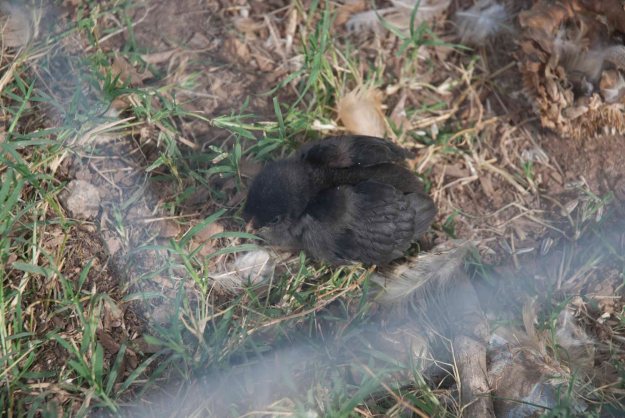 As a matter of fact, our latest batch of chicks (and last for this year) is not fairing well either. Of the 5 hatched out, one was killed by other chickens before we got a chance to separate them. This past week, one was taken by a snake, one was found dead in the coop one morning, and the two left are sluggish most of the day. I am not expecting them to make it but don’t know what’s going on! We have lost 1/2 of the chicks we have hatched out this year 😦

The older chickens are doing a great job being our soil manufacturers, though. This is the first year I have been able to cover the whole garden with chicken compost from the run! Exciting 🙂

What does your garden look like that the beginning of September? Are you able to plant a fall/winter garden? What do you use for protection for your plants during the winter? Are you drowning in weeds? Have you given up? Check out backtoedenfilm.com and see how many people around the world are gardening with minimal weeding and watering!

1 thought on “Garden in September, Eastern NC, Zone 7b”