Garden at the beginning of June

Garden at the beginning of July

Garden at the beginning of August

Well, it doesn’t look much different…It looks like the watermelon plant has sprawled more, sunflowers are taller, and there are less potatoes. However, looks (at least looks from far away) can be deceiving. Here is what is going on in our garden (North Carolina, zone 7b) in August, looking from the bottom of the photo to the top:

As you can see from the picture above, there is not much greenery left in the potato patch. We are harvesting them as needed.

There are kale and cabbage seedlings growing under the screens (in the potato patch). The extra shade really seems to be helping them along. 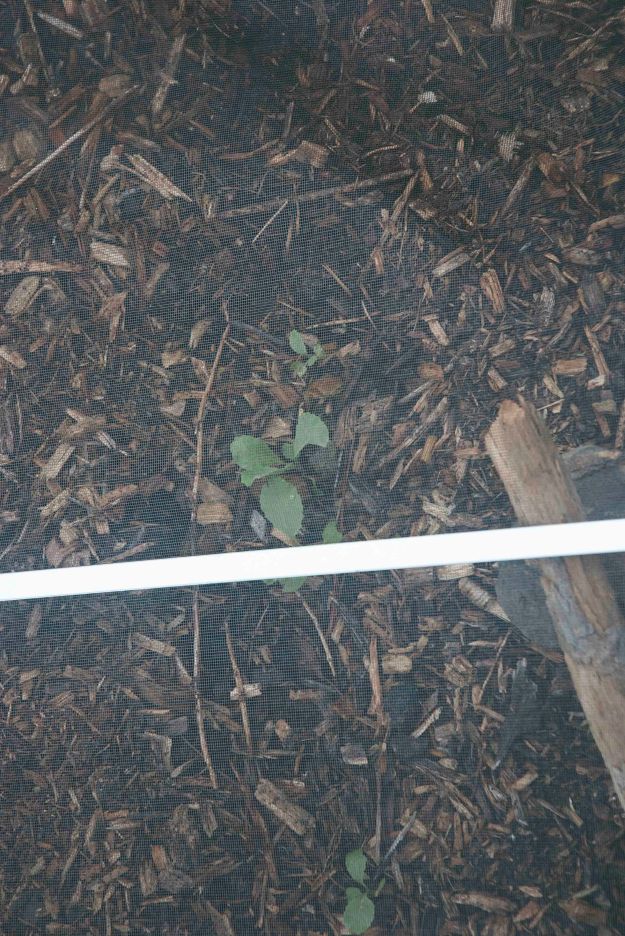 The tomatoes are producing well but as you can see in the photo below, I am really having to prune them heavily to keep the disease at bay. 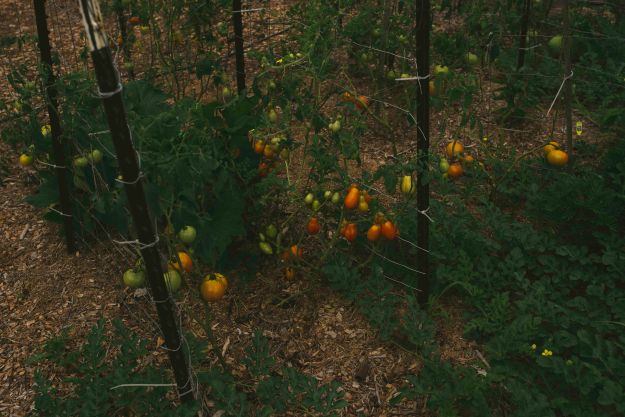 The peppers are slowly ripening. 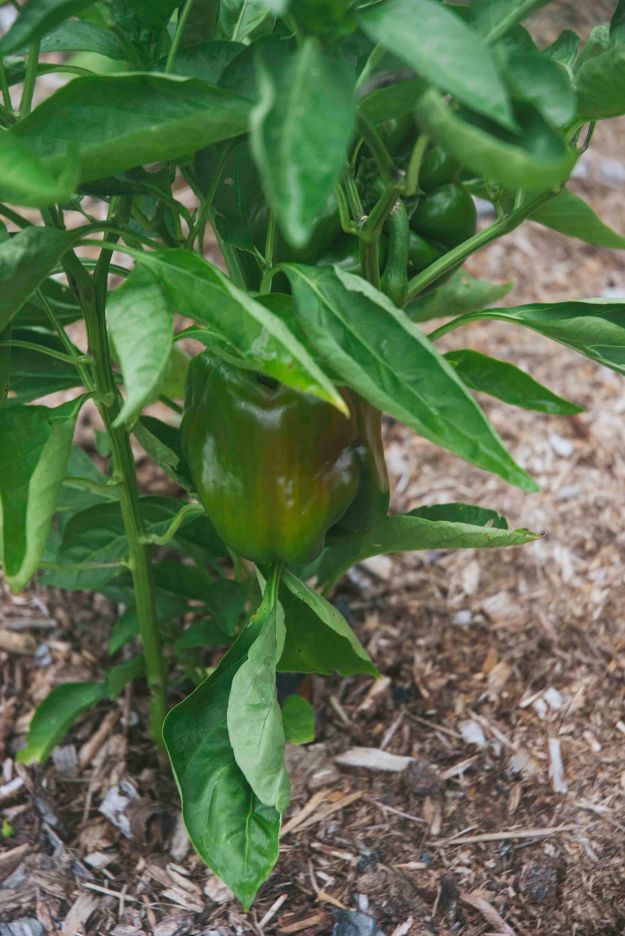 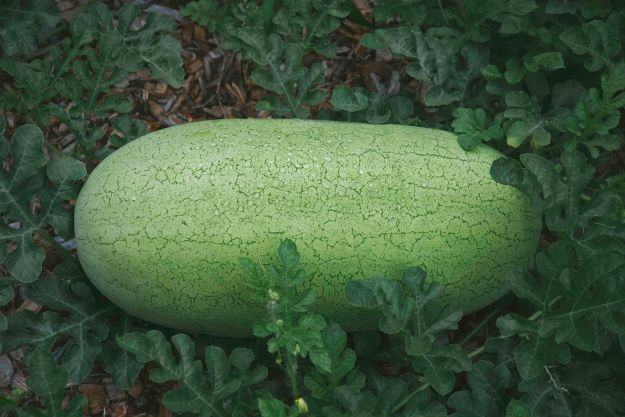 The corn patch has been stripped bare, raked over, composted, and halfway replanted with carrots and peas. 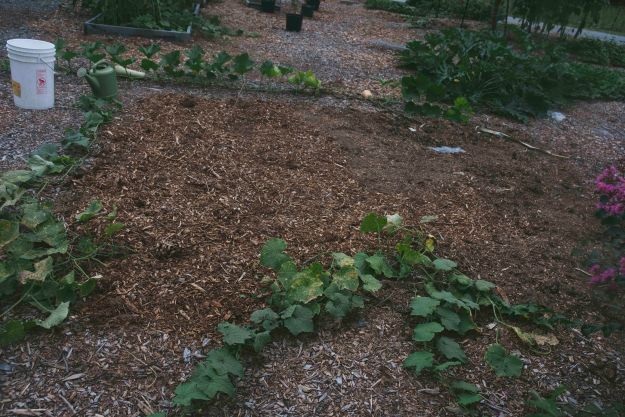 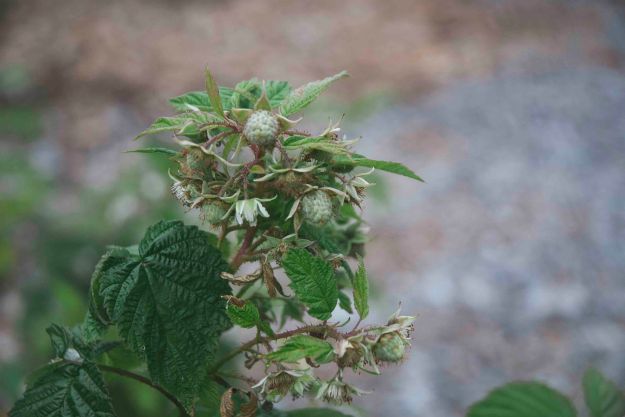 The sweet potato patches are doing well, at least from what I can see 🙂 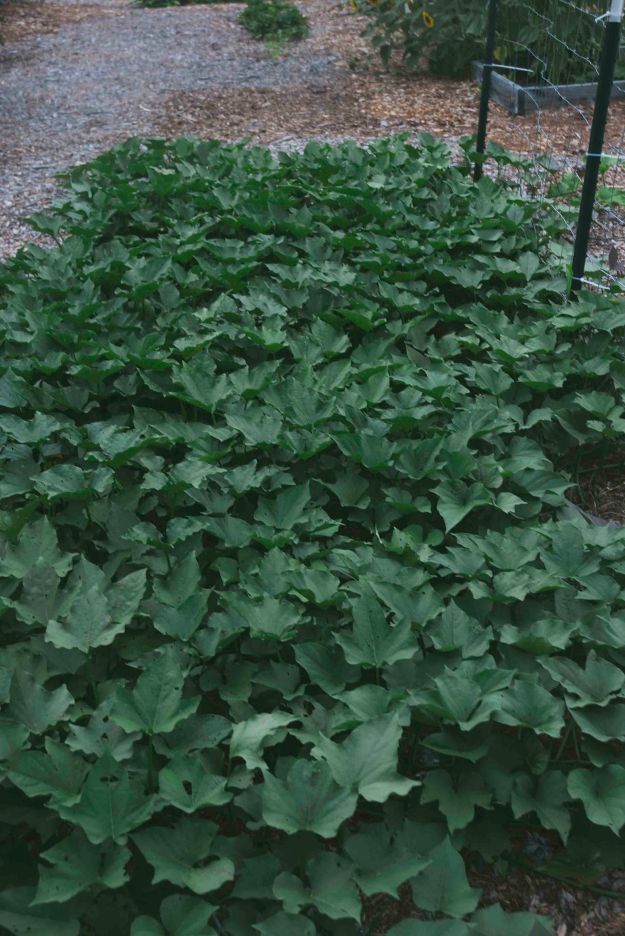 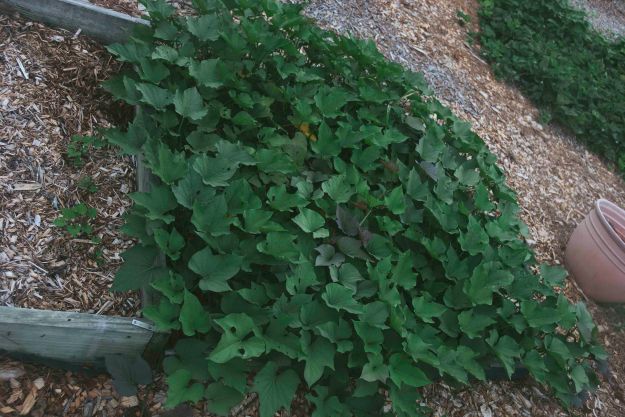 (Notice the small sweet potato sprouts to the left. That was the box in which I grew the sweet potato slips. Apparently, I left some sweet potatoes in there. I have been unable to grow much else in that box this season because the boxes with sunflowers is right next to it and they, being over 10ft tall, shade out too much sun.)

Overflow Sweet Potato Patch #2 (main sweet potato patch is in the top/left of the photo): 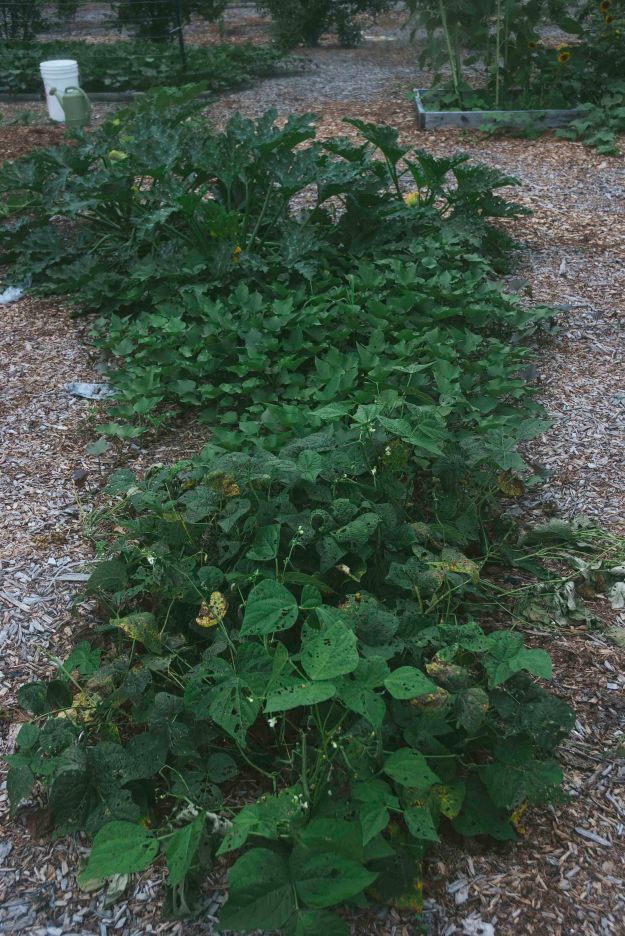 (Spaghetti squash patch used to be just above these and to their right are the volunteer tomatoes.)

The first zucchini plants I planted were devoured by squash bugs (planted at the end of April). The second round (planted mid May), planted in the original pea patch (where everything seems to do well) is doing great! All of the zucchini harvested so far has been coming from these three plants. 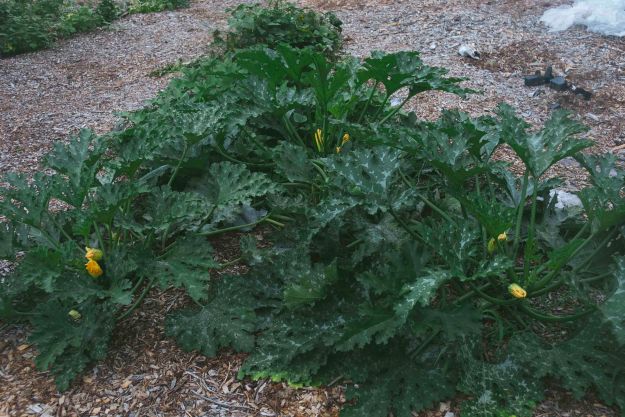 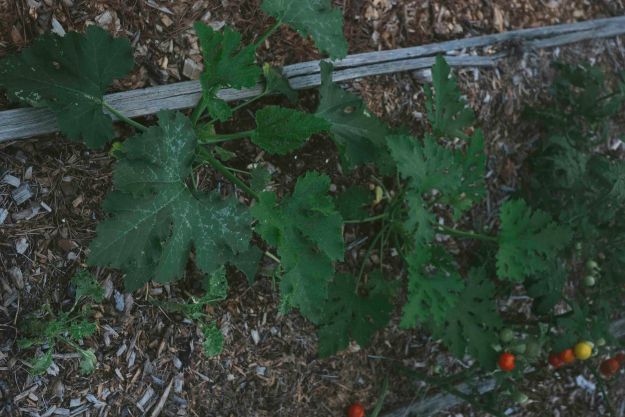 The sunflowers are all drooping. How long before I can harvest seeds? I need that space to plant fall crops!!! 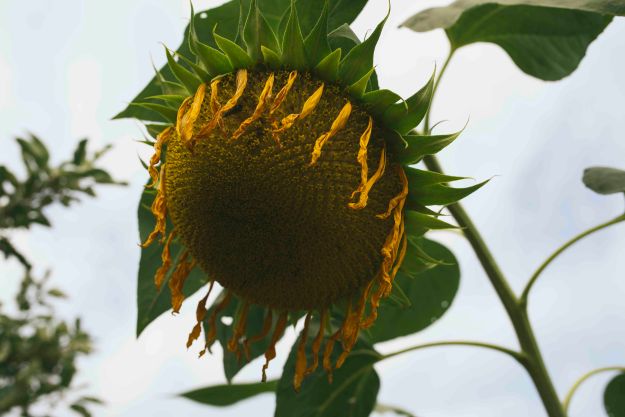 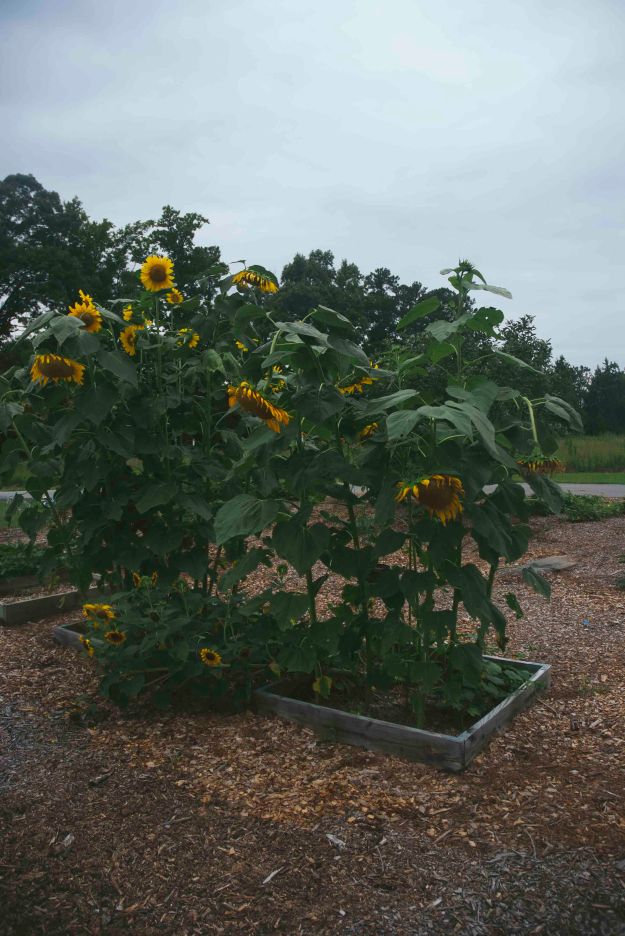 I ordered Hutterite beans this year instead of Blue Lake Bush Beans. Never again. They are supposed to be bush beans but they vine like crazy. Their beans taste more like pole beans as well. But I bought the seeds so I’m going to use them. As with most crops, I plant beans in succession so I will have a continual crop.

These Blue Lake Bush beans were ripped out earlier this week (seed from last year).

The next round of beans (Hutterite) are producing pretty well. 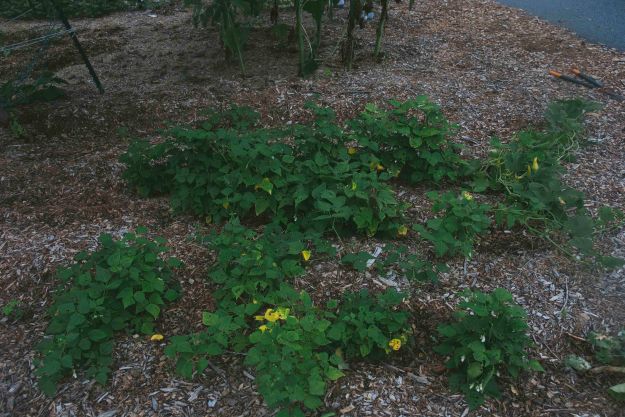 And the last round are just sprouting (overflow sweet potato patch #3 to the left, apple tree to the right). 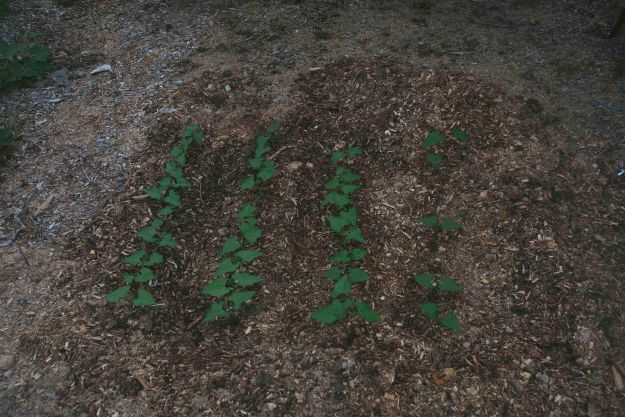 Speaking of the apple tree, I planted fall broccoli under it and it is really doing well. The germination rate was great 🙂 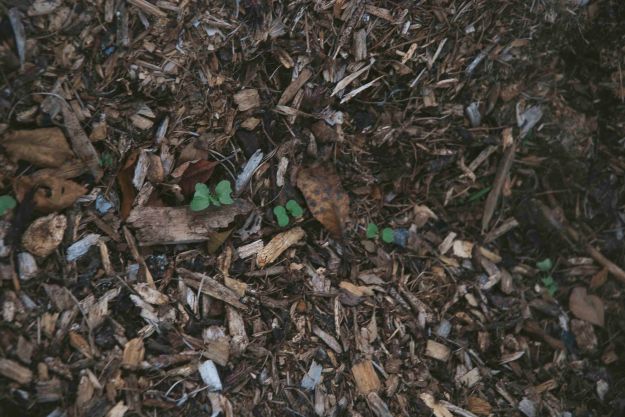 That’s what’s going on in our garden at the beginning of August. All of the summer crops but corn are still going strong and fall crops are being planted.

Our youngest chick is not so little anymore. We put her with the other chickens this week to see how she did. She got picked on quite a bit (though she stuck up for herself pretty well). Her mamma did not protect her as she should so we are still separating her from the flock until she gets bigger. 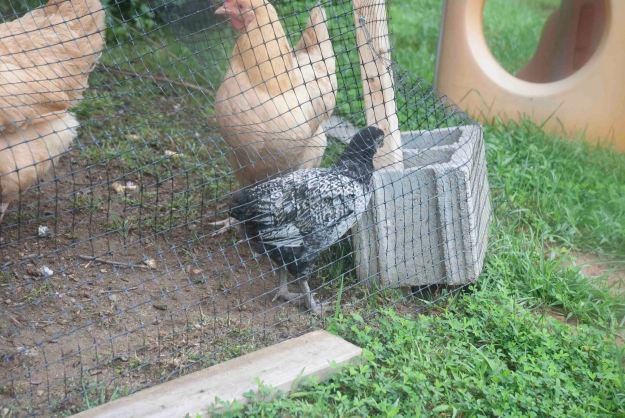 Our other two chicks have turned out to be pretty dominant among the flock. One is a rooster and the other is a big, beautiful pullet. Her comb is pretty red so I would not be surprised if she started laying any day now. They are 19 weeks old. We have gone through two roosters so far (attacked children so we had to get rid of them). So far so good with Whitey. I hope he’s a keeper. 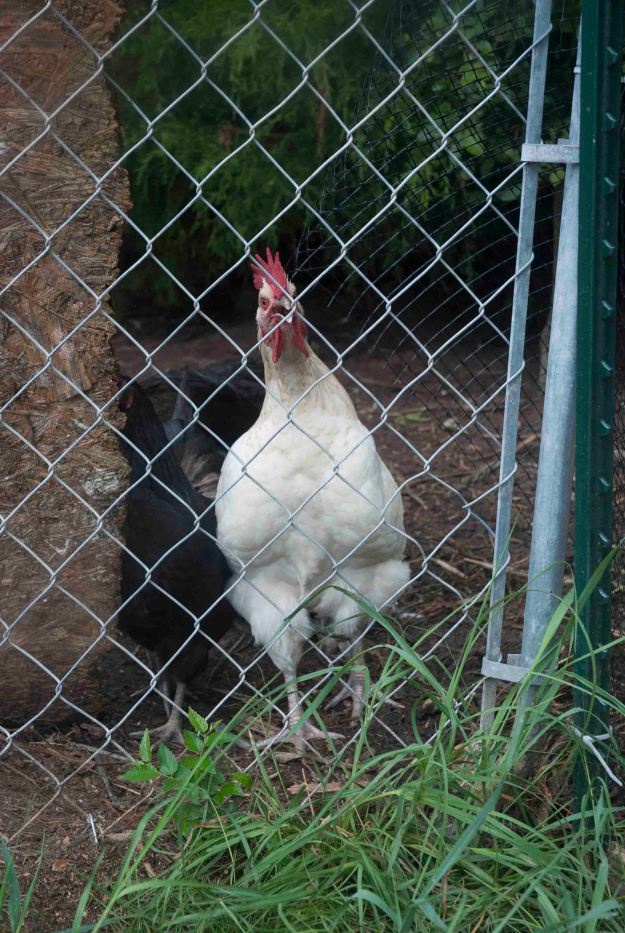 (Whitey crowing at me) 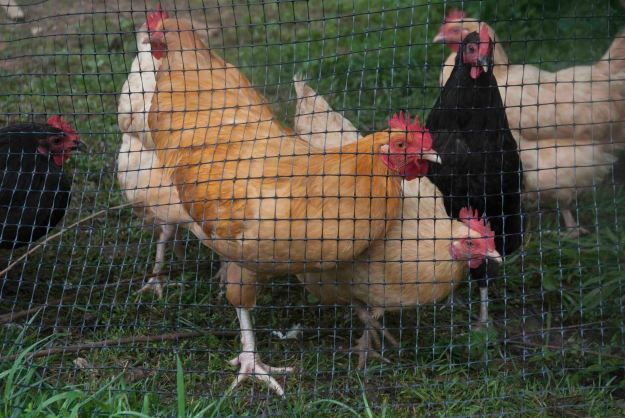 (Goldie is the darker chicken in front)

I read recently on another blog that back in the day, chickens were only fed supplementally during the winter months. During the summer months, they got plenty of bugs and greens free-ranging. We looked into it and decided to try it.

I was sick of the tunnels. They were impossible to mow around, annoying to walk over, and the chickens didn’t go in them much during the hot days because there is more shade in the run.

The side yards of our house are sloped so they do not get mowed much. The north side (by the chicken coop) was really overgrown so we decided to expand the run and let the chickens do the mowing for us. 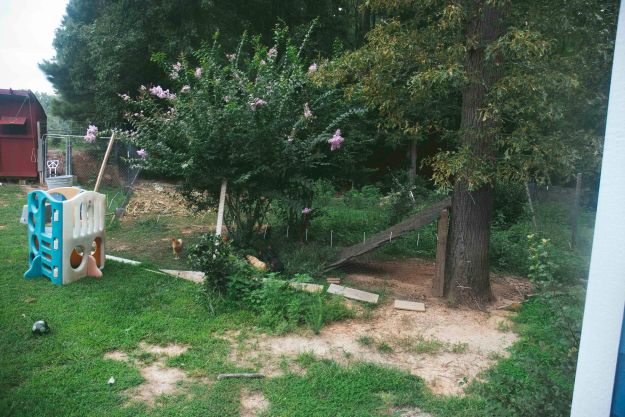 Since they now have twice the room they had before and A LOT more green, we thought we would give the ‘no feed during the summer’ theory a try. The hardest part is breaking them of the habit of eating feed. They freak out whenever we walk out the door and try to follow us (along the fence-line) wherever we go. I feel badly, but not really because they have PLENTY of food free-ranging! They have just been spoiled up until now. They get garden scraps, table scraps, and all the grass, weeds, and bugs they want.

I hope it works out. We’ll see. We have noticed our egg count has gone down significantly lately. We think it is because of a combination of factors:

I feel pretty confident they’ll get over this hump and egg production will pick back up again…We sure have gotten used to an abundance of eggs! We’ll have to adjust our diet again.

If we can make it without buying chicken feed for a third of the year, that will cut costs significantly! Right now, other than start-up costs of lumber for the coop and fencing for the run and tunnels, the only things we spend money on are our seed order once a year and chicken feed. We don’t spray our crops (with chemical or organic spray), don’t start seeds indoors (so no need for potting soil, trays, lights, heating mats, etc.)…this is really what ‘Gardening Without’ is all about! Gardening Without…

I am linking up with Green Thumb Thursday to see what other gardeners are up to this week!

August turned out to be very different from other months. I started out the month with a surplus of money because of all the produce we are getting out of the garden and I ended the month in a deficit because of Poison Ivy.

At the beginning of the month a friend and I were talking about being pregnant and how sick we get. We agreed to bring food to each other during the first three months of being pregnant instead of after the baby was born. That got me thinking…that’s what I should do with my surplus grocery money! Stock up for whenever I’m pregnant again – and use all the self control in the world to not use up the frozen meals until then.

There was more to do but I used all of my extra money and I was exhausted…oh yeah, and my kids were begging me to start school! 🙂

Then, three weeks ago, I got poison ivy 😦 My husband is a pediatric nurse so we have TONS of free samples of many drugs…even with all of those, we still had to spend over $100 on meds for me! That money has to come from somewhere so we used grocery money for the poison ivy meds and for the second half of August, we started eating from the freezer.

So now I’m not prepared to get pregnant 😉 but it is quite the blessing to know that even though I have half of the grocery money I’m used to having, we will still be able to eat well. I’m glad we were able to use the surplus grocery money in a wise way and were able to see how wise it was soon – it helps to encourage us to continue to be wise 🙂

As far as debt goes, we are still in it

We pay all of our bills and pay for groceries and gas from one of my husband’s part time jobs. It is steady work, even though it is only 20hrs/week, typically.

His other business is more sporadic as far as work and pay. Some weeks he is incredibly busy and others, we see him more (this is how we like to think about it, rather than $$ vs no $$). So from this job, after tithe & offering, we hold back 10% to put back into his business and 5% for going out to eat. The rest goes into paying off debt.

Some may think 5% for going out to eat is crazy but setting goals are useless unless you are going to reach said goals. You have to make a budget that YOU can KEEP! We used to go out to eat once a week and would take the whole family (7 people)! If we decided ‘no going out to eat until we pay off debt’, which is what some would say should be done, we would ‘break’ that promise to ourselves eventually and once you fall down once, it’s hard to pick back up where you were…just ask dieters how much they want to get back to their diet after they ‘caved’ and ate that gallon of ice cream.

So we budgeted 5% of the 2nd income to go towards ‘out to eat’. Because we are in the budget mind frame, however, we have been really good about finding other ways to save money when going out to eat.

The dilemma: This month is the month to buy NC State Fair tickets at a discount. We LOVE the fair! We typically go two days each year. We have already not gone on a family vacation this year because of debt…were we going to have to forgo our beloved Fair because of debt too? 😦 Then I saw it. We had a good amount of ‘date night money’ left in the budget…and I have $15 in swagbucks…and my husband just got a coupon for $10 off…and we have a little bit of a gift card left…so our next date night will be free. We have enough to go to one day of the fair! 🙂 So happy! So thankful!

Yes, we are still in debt. But, we are staying within budget. My husband hates following ‘gurus’ so I don’t know what Dave Ramsey or Clark Howard would say. I am frustrated because, well, who wants to be in debt? But at the same time, I’m proud of us for staying within the budget for 7 months now and I am just praying that we will be out of debt soon…and never.go.back.

Anyone else created a budget, stuck to it, and actually got out of debt?! I know it is possible but with our incredibly high interest, it seems impossible at times