I’ve been gardening for about three years now (I dabbled before but would only produce one or two successful plants) and I am surprised every time something does not go well. Delusional much?

My greenhouses with warm-weather seeds started to sprout about 3 weeks ago. Two weeks  ago, the temps dropped down to 24 one night. I covered the greenhouses with a sheet but all the sprouts died. Some of my cool-weather sprouts were frost-bitten as well.

I replanted the warm-weather veggie seeds and they sprouted within a week. The weather has really been warming up. I also received purple sweet potato slips in the mail last week from Baker Creek. I did not realize they would send them out so early. I called them to ask if this was customary because if so, I need to make sure I do not order from them again, as it is not even close time to plant sweet potato slips! They said, yes, they send them out April 1st and I should just put them in a pot in a sunny window. That is not an option for me…we have no sunny windows as our house is set back in the woods. So…I planted my sweet potato slips even though I would not normally for two whole months! 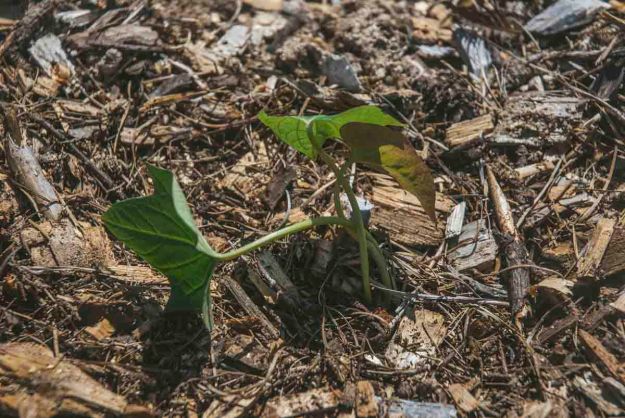 Then, last Saturday night, the temps dipped again. Only this time, it was not forecasted to do so. Nothing was covered and everything died…all of the newly-sprouted warm-weather seeds, my beautiful lettuce 😦 And yes, my $9 sweet potato slips. Talk about a waste of money!

So I did what I should have done in the first place: I ordered some sweet potato slips from Sand Hill Preservation Center. I should have known. Their website is where I first learned about starting my own slips and the importance of warm soil (not necessarily just planting whenever the last frost date hits, like everyone around here tells me to do). Not only are their slips reasonably priced, but they have what seems to be endless varieties! I ordered a “Purple Assortment” in which they pick out 3 purple varieties to send to me. I also ordered a “Rainbow Assortment” for half price (variety of white, orange, and purple sweet potatoes) under the season close-out sale. They send their sweet potato slips out at the end of May – the PERFECT time for me to plant! Under the season close-out sale, they send out sweet potato slips June 25th, still enough time to grow sweet potatoes in our hot summers.

After I ripped up the tarp, I could already see shoots ready to grow!

I ended up ripping up half of what we planted originally and then replanted everything. It was incredibly time consuming! I only had time to do 1/3 of the row. And, when I stepped back to look, only then did I realize they were too close to the blueberry bushes.

In this next picture, notice

I’m not sure, what with all the transplanting, if we will get a crop like we did last year but it is better in the long run. It needed to be done.

We planted three kiwi plants, raspberries, and blackberries many years ago on the South side of our house. Sound like a good plan to you? Yeah, it did to us too. However, as I mentioned before, our house is set back in the woods. So the South side of our house is still on the North side of the woods…meaning not enough sun to grow anything. The raspberry plants all died. The blackberry and kiwi plants did not…nor did they ever fruit.

This week I replanted two of the three kiwi plants. They look really healthy.

I planted the male in front of the chicken coop (south-facing). We are going to somehow figure out a way to let it vine up the front of the coop without hindering access to the door or window. I am going to put another kiwi plant on the opposite corner of the coop (west-facing).

I planted one female plant on the side of our house. We do not want it vining up our house…we are contemplating an archway or two? Notice where my daughter is. That is where the base of the plant is. The blanket on the right hand side of the picture is where we pruned the kiwi plant. Those things grow like mad! 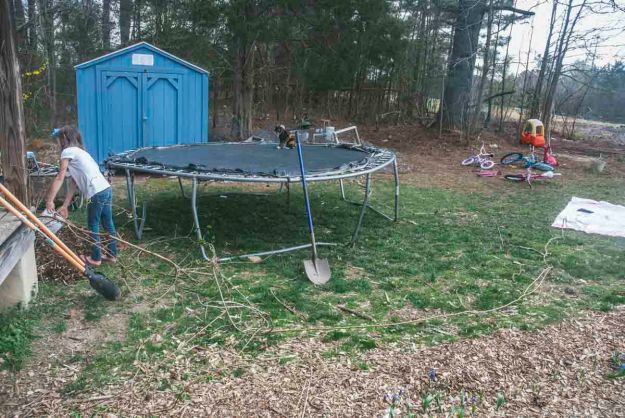 I have no idea where to put the blackberry plant. I need to research what it is/is not supposed to be near before I move it. So I guess issue #3 is really just a beginner’s mistake. I can’t really blame the sun 😉

I am thankful for all that has gone well with the garden! I guess enough has gone well to make me surprised when things do not 🙂 The days of ripping up tarp and moving trees really makes me wish I had some teenagers in the house!

Are you spending time out in your garden? Do you enjoy learning from your mistakes as much as I do?